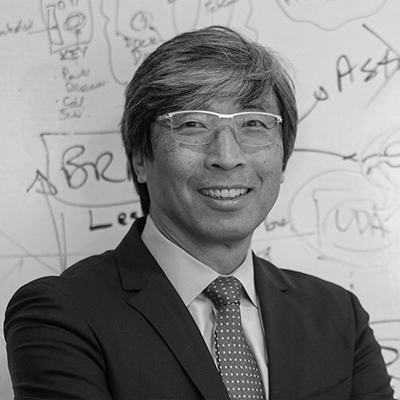 He serves as Chairman and Chief Executive Officer of NantWorks, an ecosystem of companies with deep understandings in a wide variety of complex industries, from medical science to physics, from data to AI, and from communications to mobility.

Dr. Soon-Shiong was born in Port Elizabeth, South Africa, and received his medical degree at the University of the Witwatersrand, Johannesburg in  1975.  He was the first Chinese intern granted permission to serve his internship at the Johannesburg General Hospital during the period of apartheid. Following a period in the TB clinics in East London, he left to continue his training as a surgeon at the University of California,  Los Angeles (UCLA).  He was appointed  Assistant  Professor of Surgery and Assistant Professor of Medicine at UCLA, led the development of the California NanoSystems Institute, and received support from NASA and NIST to develop next-generation biological materials. While at UCLA, he served as Executive Director of the UCLA Wireless Health Institute and a Professor of Microbiology,  Immunology & Molecular Genetics and Professor of Bioengineering at the California NanoSystems  Institute of UCLA.  He currently is an Adjunct  Professor of Surgery at the University of California, Los Angeles (UCLA), a visiting Professor at the Imperial College of London. Dr. Soon-Shiong currently sits on the Board of Councilors at the University of Southern California (USC) Viterbi School of Engineering.

Over the course of Dr.Soon-Shiong's career, he has pioneered novel therapies for both diabetes and cancer, including the revolutionary drug Abraxane, a protein nanoparticle, which has received U.S. Food and Drug Administration  (FDA) approval for the treatment of metastatic breast cancer, lung cancer and advanced pancreatic cancer in both the U.S. and E.U., published more than 100 scientific papers, and has been granted more than 400 patents worldwide for groundbreaking advancements spanning myriad fields of technology and medicine.

Dr. Soon-Shiong's path to cancer research began while doing research for the National  Aeronautics and Space Administration (NASA) that involved harnessing stem cells to make insulin. In 1991, he founded a biotechnology  company to develop a novel nanoparticle anticancer drug with the concept of using ''the tumor's biology against itself."

Following the sale of these two companies in 2010, Dr. Soon-Shiong established NantWorks,  LLC, an ecosystem of companies with deep understandings in a wide variety of complex industries, from science to data, communication, and mobility. The mission of NantWorks is to develop technologies which would have a global impact on life-threatening diseases such as cancer and pandemic infectious diseases. Under the NantWorks umbrella, Soon-Shiong serves as Executive Chairman of NantKwest, a Nasdaq-listed immunotherapy company focusing on natural killer cells; Chairman and CEO of ImmunityBio, Inc., a biotechnology company focusing on vaccines and immunotherapy for cancer and infectious diseases; Chairman and CEO of NantHealth, a Nasdaq listed transformational healthcare company converging biomolecular medicine and bioinformatics with deep learning AI to empower physicians, patients, payers, pharma and researchers to transcend the traditional barriers of today's healthcare system; Chairman of NantEnergy, a privately-held company accelerating the worldwide transformation to clean, reliable energy disrupting industrial-scale methods of heat production, cement and plastics manufacturing; and Owner and Executive Chairman of California Times, publisher of two of the state's largest newspapers, the Los Angeles Times and The San Diego Union-Tribune.

In  January 2016,  Dr.  Soon-Shiong announced the formation of  Cancer   Breakthroughs   2020,  a comprehensive collaboration of researchers, insurers, academic institutions, and pharmaceutical companies to accelerate the potential of combination immunotherapy in the treatment of cancer.

Dr. Soon-Shiong is Chairman of the Chan Soon-Shiong Family Foundation and of the Chan Soon-Shiong Institute of Molecular Medicine, a nonprofit medical research organization. In May 2017, he was appointed by House Speaker Paul Ryan to the Health Information  Technology  Advisory Committee, a committee established by the 21st Century Cures Act that will advise the President and his administration on health IT policy and will tackle issues with healthcare interoperability and privacy and security while working with key stakeholders to create standards in these areas.

In April  2016, Dr. Soon-Shiong received the Franklin Institute Award for his visionary leadership and commitment to advancing medical and scientific research and bringing new treatment options to people with cancer. Dr. Soon-Shiong was also honored at the Vatican with the Pontifical Key Visionary Award in April 2016, which recognizes "medical innovators who change the course of history and reduce suffering on a global scale by blending visionary thinking with real action." The Friends of the National Library of Medicine has also honored him with their Distinguished  Medical Science Award.

In June 2017, the Smithsonian Institute honored his work by placing Abraxane in the permanent exhibit at Smithsonian's National Museum of American History.

In June 2018, Dr. Soon-Shiong completed the purchase of the Los Angeles Times, San Diego Union-Tribune, and publications under the California News Group.

In 2020, Dr. Soon-Shiong and his scientific team devoted their resources and scientific expertise to the development of a vaccine to address the COVID-19 pandemic. Utilizing their expertise in treating cancer, Dr. Soon-Shiong and his team took the novel approach of developing a vaccine that would induce both antibodies and T cells to clear the virus. To date, this vaccine construct which includes both the Spike (S) and Nucleocapsid (N) protein is the first-in-human subcutaneous formulation to demonstrate antibody as well as T cell immune response. In the US BARDA Operation Warp Speed sponsored Non-Human Primate

(NHP) challenge study, the vaccine both as an oral room temperature stable capsule as well as a subcutaneous formulation showed 100% protection against SARS-CoV-2 challenge in all animals tested. The subcutaneous formulation has initiated clinical trials and demonstrated no serious adverse events to date. The sublingual and oral formulation will initiate Phase 1 trials shortly. With the evolution of the virus and mutations in Spike, theN+ S T cell vaccine developed by ImmunityBio could provide a solution to the rapidly mutating SARS-CoV-2 virus.  By developing a room-temperature oral form of the vaccine, global distribution, especially to developing countries could be achieved.

Born and raised during apartheid in South Africa, Dr. Soon-Shiong resides in Los Angeles California, and is a citizen of the United States.